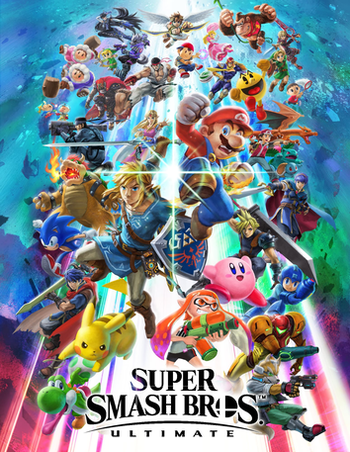 EVERYONE IS HERE!
Colors weave into a spire of flame
Distant sparks call to a past still unnamed
Bear this torch against the cold of the night
Light will guide you on your way to the ultimate fight!
—The final verse of Lifelight, the theme of Super Smash Bros. Ultimate.

Super Smash Bros. Ultimate is the fifthnote Sixth if one counts the previous game's Wii U and 3DS incarnations as separate installments, as Masahiro Sakurai himself does installment in Nintendo's Massive Multiplayer Crossover Platform Fighter series Super Smash Bros. It is developed by Bandai Namco and Sora Ltd. and published by Nintendo for the Nintendo Switch. Initially teased in March 2018 at the end of a Nintendo Direct, the game was formally revealed at that year's Electronic Entertainment Expo and was released on December 7, 2018.

The biggest Smash Bros. game to date, the title features a grand total of 76note counting all 3 members of Pokémon Trainer's team fighters in the base roster, including every single character from previous installments (including several not seen since Super Smash Bros. Melee in 2001), newly christened "Echo Fighters", and several brand new characters, including the Inklings from the Splatoon series and Guest Fighters like Simon Belmont from the Castlevania series.

Following the game's release, six fighters were added as Downloadable Content up until January 2020. Excluding the first onenote which is Piranha Plant from Super Mario Bros.; they could be obtained as a bonus for players who purchased the game and redeemed its Gold Points with their My Nintendo account before the end of January 2019, which is when it was released. In February, it was made available as a standalone purchase, five of them released as Challenger Packs (available individually or as a bundle called the Fighters Pass), which contain a fighter, plus music and a stage related to themnote The Fighters Pass Vol. 1 consists of Joker from Persona 5 (released on April 17, 2019), The Hero from Dragon Quest (released on July 31, 2019), Banjo and Kazooie (released on September 4, 2019), Terry Bogard from Fatal Fury (released on November 6, 2019) and Byleth from Fire Emblem: Three Houses (released on January 28, 2020).

On September 4, 2019, it was announced in a Nintendo Direct that further DLC characters would be developed for the game after the completion of the first wave of content. In the January 16, 2020 "Mr. Sakurai Presents" video, the post-Pass DLC was revealed to consist of six more Challenger Packs, which will be bundled as the Fighters Pass Vol. 2, with its contents set to release by December 31, 2021.note The Fighters Pass Vol. 2 consists of an unnanounced ARMS character (to be released June 2020). The remaining five fighters have not been revealed yet.

Along with the new and returning characters, the game offers over 100 new and returning stages, 900+ music tracks, and a new Adventure mode, World of Light, which allows you to collect Spirits of non-playable characters (from all franchises with playable representation, and a few additional ones) that can empower and grant extra abilities to your fighters.

Examples of Spirits can be found in their own Mythology Gag page here.

In this Smash Ultimate animation by Nova, the Inkling defeats multiple Smash characters. Captain Falcon turns it right around on her.

In this Smash Ultimate animation by Nova, the Inkling defeats multiple Smash characters. Captain Falcon turns it right around on her.