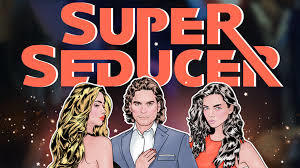 The game later released a sequel called Super Seducer 2, with a more diverse cast of characters and a woman around to give a female's perspective on romantic situations.