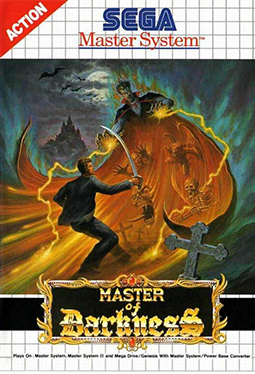 Master of Darkness is a video game developed by SIMS and published by Sega for the Sega Master System and the Game Gear (though it was called Vampire: Master of Darkness on that system) in 1992 and later released for the 3DS Virtual Console in 2013. It's a platformer starring a psychologist named Ferdinand Social, who gets a weird message:"Killer vampire. Go to Thames. Caution, caution, in the wake of Dracula!" And he must now clear five stages and defeat the vampire. The gameplay is really similar to Castlevania, with the mechanics and atmosphere being similar.

Example of:
Ouija Board