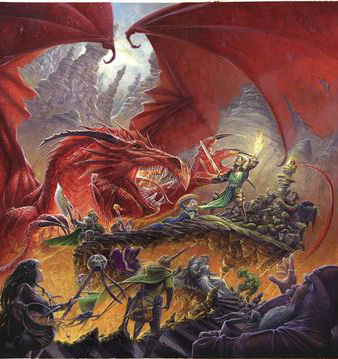 Talisman is a fantasy Adventure Board Game originally released in 1983 by Games Workshop. The game is played by moving one of a variety of archetypal fantasy characters around the board, amassing power and treasure that is used to challenge the increasingly more deadly inner regions until one character claims the "Crown of Command"... killing all other player characters in the process. In the years following its initial run, the game has received numerous revisions and edition changes, some of which have added alternate play-styles, characters, and victory conditions. The fourth and most current edition was released in 2008 by Fantasy Flight Games.

The story of the world of Talisman is as follows: Long ago, a wizard controlled the land, his rule going unchallenged for centuries thanks to the powerful arcane magic and the mighty enslaved spirits at his command. The wizard's reign only came to an end when death inevitably claimed him... however, before meeting his fate the wizard hid his most powerful magical item, the Crown of Command, deep within the Plane of Peril, where it would be forever guarded by the most vicious and powerful of the wizard's former servants. With his last breath, the wizard proclaimed that "only a person with the strength, wisdom, and courage required to take my crown will rule in my stead."

In the many years following the wizard's death, countless adventurers have attempted to claim the crown, and each of them have met a gruesome end at the hands of the crown's guardians and the innumerable deadly creatures that have come to inhabit the region. Though the lands are littered with the bones of those who have failed in their quest, the promise of ultimate power draws ever more to make the attempt... each certain that they will be the one to eventually take the crown of command for themselves and become the supreme ruler of the lands.

In Talisman, the game is played by first selecting one of numerous characters, each possessing unique abilities and varying levels of prowess in both battle and magical power. Players move their characters about the various squares of the board by rolling dice to determine how many squares the character can move in the direction of the player's choice. At the end of the character's movement, the player follows the instructions of the square their character lands on: this most often involves rolling a die to determine a random beneficial or detrimental effect, or drawing from a deck of "adventure cards" that can grant the character items or followers, cause events that apply to a single or multiple characters, or initiate combat with a wide variety of enemy creatures.

Combat is resolved by rolling dice to add to the relevant stat of both the character and enemy, depending on the type of combat that is occurring: Strength for "battle" (physical combat) and Craft for psychic combat. Once the base stat, the value of the die roll, and any relevant bonuses granted by spells or items have been tallied, the scores for each combatant are compared, with the highest score winning. If an enemy creature is defeated in combat, it is most often killed and its card is removed from the game board. If a player character is defeated, they lose one of a limited number of "lives", which can eventually lead to the character's death if their total lives is reduced to zero. Players can choose to initiate combat against other player characters that are in spaces that their own character lands on. In player versus player combat, the winning player may choose to either take a single item or reduce the life total of the opposing character.

The goal of the game is to acquire items, followers, and experience to increase the character's strength and craft scores until they are powerful enough to move into the deeper regions of the board: the middle region offering more dangerous combats and greater rewards than the outer region, and the inner region containing a series of challenges that eventually leads to the character gaining the Crown of Command at the center. Once a character acquires the crown, the player can use it to attempt to reduce the life total of all opposing player characters each turn. Once all opposing players' life totals are reduced to zero in this way, the player with the crown is declared the winner. Later edition changes and expansions have added a variety of different victory conditions that can allow a player to win the game without claiming the Crown of Command.

A PC version of the game based on the revised 4th edition rules and titled Talisman: Digital Edition was developed by a game making company named Nomad Games, and was released on Steam Early Access on October 14, 2013. The game's various expansions periodically come out as DLC after it came out of beta. Additionally, a single player version of the game called Talisman: Prologue and made by the same people can be purchased on various digital distributors. It was eventually ported to PlayStation 4, PlayStation Vita and Nintendo Switch.

For the 35th anniversary the first release, Pegasus Spiele and Games Workshop developed new games set in the world of Talisman including Talisman: Legendary Tales, Talisman: The Card Game – Clash of Heroes and a Role-Playing Game Talisman: Adventures – The Fantasy Role Playing Game.