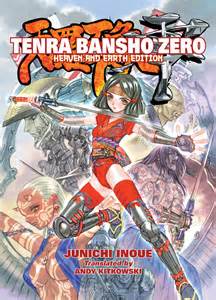 Tenra Bansho Zero is a Japanese Tabletop RPG created by FEAR (not to be confused with the video game series) and was published in Japan in 2000, Zero is the second edition of a tabletop game called Tenra Bansho, which was released in 1997. Zero refers to this second edition being a rework of rules, also known as starting from zero. The game's creator refers to it as "Hyper Asian Fantasy".
Advertisement:

Tenra Bansho Zero takes place in the distant future, where humans have colonised the distant planet of Tenra. After many wars, the world has become an Anachronism Stew: of feudal Japan and anime-like science fiction future, in which katana-wielding robots stand shoulder to shoulder with spirit-powered monks.

As of October 2012, Kotodama Heavy Industries has translated the books into English. As of February 2013, the game is available in PDF format