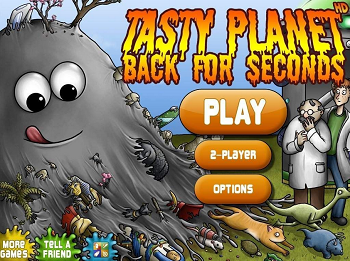 Tasty Planet is a 2006 video game by Dingo Games, which is similar to the Katamari Damacy line, but with Grey Goo instead of the Katamari ball. You begin as a micrometer-sized bit of experimental Grey Goo bathroom cleaner, eating tiny dust particles, but get free, and continue consuming, growing to eat mice, people, buildings, asteroids, the Earth, stars, a black hole, the entire universe, and finally SPACE AND TIME ITSELF.
Advertisement:

In 2010, the sequel Tasty Planet: Back for Seconds has come out, in which our protagonist can time travel. It also features multipart levels, which means once you reach a certain size, the game zooms out to reveal a bigger scene, and you find yourself small again with new things to eat.

Then a spin-off is made in the name of Tasty Blue where you play as a fish, a dolphin, and a shark. The gameplay and features are still similar with the second game.

A demo version can be found here

More recently, another game in the series came out, called Tasty Planet Forever. This one consists of multiple parts, each with its own protagonist (including the Goo). The parts are about ten levels each, plus a similar amount of bonus levels.

All games are available on PC through Steam, as well as on iOS and Android.