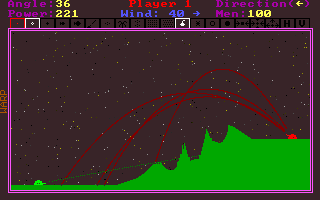 Green's attempts to tunnel through the terrain are impressive, but Red's shots are landing closer each time. Who will win?
Advertisement:

An artillery game is a video game within the Strategy Game genre which tasks the player with aiming and shooting to destroy opponents in a combat simulation. Usually the playing field (or battlefield, if you will) is shown in a Side View, with two opposing factions concentrated on opposite sides. Each faction starts with one or more units, which may take the form of tanks, cannons, mortars, or other artillery pieces.

The player determines the angle and velocity of each shot before firing, hopefully adjusting for such factors as gravity and wind speed (among other factors). Successfully striking a unit may cause damage or instantly destroy the unit, and when all but one faction's forces are eliminated, that faction wins the battle.

Other common features include randomly generated terrain and unit placement, as well as causing missed shots to blast holes wherever they land — which can lead to "tunneling" strategies where a player (over the course of several turns) shoots through (or down) a tall barrier in order to fire a high-powered shot directly at the opponent instead of attempting to lob shots over the obstruction. Because the task of the game is to come up with a winning combination of speed and angle, these games will often display visible trails from previous shots so the player can refine their aim on subsequent turns.

Most examples of artillery games are Turn-Based Strategy by tradition, but there also exist several games played in real time instead. Turn-based games may also impose a time limit on each player's turn.