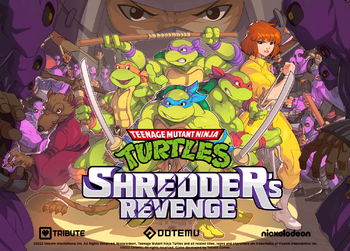 These turtle boys are back and ain't cuttin' Shredder slack!
Raphael: So what now, fearless leader?
Leonardo: Turtles, let's get our shells in gear!
Michelangelo: Mondo notion, dude!
Donatello: Well, what are we waiting for?
All Turtles: Let's kick some shell!
Advertisement:

Teenage Mutant Ninja Turtles: Shredder's Revenge is a Beat 'em Up game developed by Tribute Games (Panzer Paladin, Mercenary Kings), published by Dotemu (Streets of Rage 4, Metal Slug Tactics), and created by the team who worked on Scott Pilgrim vs. the World: The Game and the Game Boy Advance tie-in for TMNT. It is based on the 1987 cartoon, and was released for PC, PlayStation 4, XBox One, and Nintendo Switch on June 16, 2022.

Bebop and Rocksteady have stolen some "gnarly devices" from Channel 6 News in order to reassemble Krang's robot body for his and Shredder's latest evil plot — capturing the Statue of Liberty (again). Naturally, this causes the Teenage Mutant Ninja Turtles to get their shells in gear and storm the streets of New York City, the Technodrome, Dimension X, and beyond to stop Shredder from succeeding in his evil plan. Playable characters include the four Turtles (Leonardo, Donatello, Raphael, and Michelangelo), April O'Neil, and Master Splinter, along with Casey Jones as an unlockable character.

The game is intended to harken back to the classic side-scrolling brawlers from Konami, specifically the original arcade game and the various versions of Turtles in Time, and even looks the part. Up to six players locally and online* The PlayStation 4 version is limited to four players when playing locally can join in, and the attack options for each character have been considerably upgraded. There are two main gameplay modes: Arcade Mode is a linear experience that challenges players to clear the game on one "credit", while Story Mode gives players unlimited lives and adds a world map, an RPG-like experience leveling system, and collection sidequests that have additional rewards.

The soundtrack is composed by Tee Lopes, best known for the soundtrack of Sonic Mania, with contributions by other fellow musicians, including Jonny Atma, Mega Ran, Mike Patton, and the Wu-Tang Clan's Ghostface Killah and Raekwon. In addition to a digital release, the soundtrack was also made available physically on vinyl and CD

day-and-date with the game.

Leonardo: Looks like another victory for the forces of good!
Donatello: Way to go!
Raphael: Easy-peasy.
Michelangelo: Outstanding, mon frère!
April O'Neil: What a scoop!
Splinter: I trust I have made my point.
Casey Jones: Job well done.
All Turtles: COWABUNGA!
Feedback

Shredder uses a mutagen gas to take on the Turtles.

Shredder uses a mutagen gas to take on the Turtles.