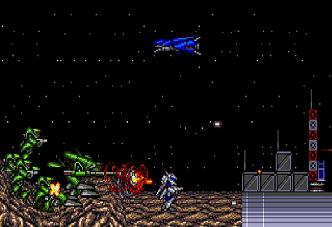 I think these gentlemen may wish to harm me.

Rex: The Earth must not be a battleground again! We defend her.
Rance: And we shall never reconcile with you!

Developed by NCS in Japan in 1990 for the Sega Genesis (and known as Assault Suit Leynos there), Target Earth is a side-scrolling shooter and perhaps one of the earliest Humongous Mecha video games. It is also Nintendo Hard, and comes with a well-developed plot.

An Opening Scroll (briefly) establishes the background: Earth's outcasts have returned with a vengeance and attacked the planet in a vicious assault. The Earth Defense League tries its best to hold, but later levels reveal that Earth has been at least partially overrun. The end of the intro and the beginning of the game focus on Ganymede, one of Jupiter's moons.

Rex suits up in his special Assault Suit just as the base comes under attack, and so begins a brutal campaign to defend Earth from her assailants. Rex faces down hordes of Mecha-Mooks, Heavily Armored Mecha-Mooks, Elite Mecha-Mooks, and enemy warships, backed only by his Redshirt Army of bronze-colored Mechs and the far more useful officers and allies who provide intel via comm transmissions. Through the course of his battles, Rex learns more about the enemy that has attacked them seemingly without provocation, and begins to doubt the righteousness of the war.

A Japan-only sequel for the Sega Saturn was released in 1997 which has a much more balanced difficulty, more Assault Suits to unlock and use, tons of customization options and a generally faster-paced gameplay. Still no less Nintendo Hard though. A remake of the original game by the same people who made Armored Hunter Gunhound was released for the PS4 on August 30th, 2016.