Video Game / Tales of the Tempest 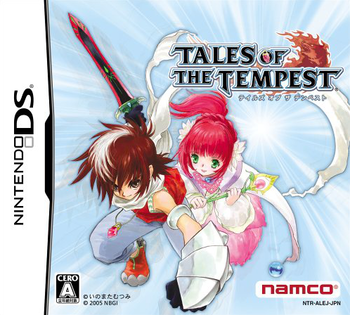 Tales of the Tempest is a 2006 Eastern RPG for the Nintendo DS, and part of the Tales Series.

Caius Qualls is a typical everyday protagonist living a simple and peaceful existence in a small village alongside his not-girlfriend, Rubia Natwick. Unfortunately, his peaceful life is shattered when he discovers that he is actually one of the feared Lycanth, and his hometown is destroyed by two Lycanth-hunting Knight Templars.

Caius and Rubia flee the massacre and start looking for answers to their numerous questions. Who or what are Lycanths? Why do Lycanths and Humans hate each other so much? What happened to trigger the war between the two races? Why is the local Corrupt Church so incredibly mean? And who is that mysterious masked antagonist who probably does not definitely have a profound connection to Caius?

They also run into other comrades along the way, including: Tilkis Barone, a prince from a distant kingdom; Forest Ledoyen, another Lycanth refugee; and Arria Ekberg, a member of the Corrupt Church who is willing to help them stop the madness.

Developed by Dimps (yes, not by Namco Tales Studio), Tales of the Tempest is the ultimate Black Sheep of the Tales franchise. Originally released as an entry in the main series, the extremely poor critical reception and overall quality of the game led to the segregation of the Tales Series into "Mothership Titles" (main games) and "Escort Games" (spinoffs, crossovers and otherwise secondary titles), the latter of which Tempest was dumped into. That said, it is clear that Namco Bandai reserves a little love for at least the characters of the game, including them as cameo characters and costumes in other games in the series. This includes a special event dedicated to Rubia in Tales of Link.

Unreleased in English, though a Fan Translation was released out of nowhere on April Fools' Day 2013 and was available until the patch makers shut down their site in 2018 (mirrors are available, however).