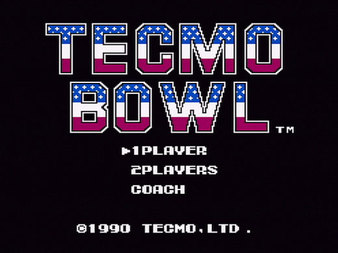 Tecmo Bowl is a video game series. It is based on American Football and was released in arcades in 1987. It was later ported to the Nintendo Entertainment System in 1989 (and ported twice again - once in 1991 for the Game Boy and again for the Virtual Console in 2007; albeit in the VC release, the players' names are removed and represented by their number) You can choose from 12 teams, a password option, and started a trend. In December 1991, a sequel was released called Tecmo Super Bowl. Nearly two years later, Tecmo Super Bowl was brought to the Sega Genesis and Super Nintendo Entertainment System. Despite having a similar name to the NES game, it is not a port. Two years later, Tecmo released two more sequels - Tecmo Super Bowl 2: Special Edition and Tecmo Super Bowl 3: The Final Edition. Despite the last one implying it was the final edition, another Tecmo Super Bowl game was released for the Sony PlayStation in 1996. Nearly twelve years later, the franchise was reborn with the release of Tecmo Bowl: Kickoff for the Nintendo DS in November 2008. The most recent release in the series was Tecmo Bowl Throwback for the Xbox 360 and the PlayStation 3 in April 2010.

The series in general include:

The Arcade and NES versions include the following tropes:

Tecmo Super Bowl II and III include the following tropes