Every soul contains a whisper of light
Gleaming faintly as it dwindles from sight
No escape, no greater fate to be made
In the end, the chains of time will not break
—Lifelight, the theme of Super Smash Bros. Ultimate

The fact that this is the first and only Smash Bros. game to get its own page should speak volumes. 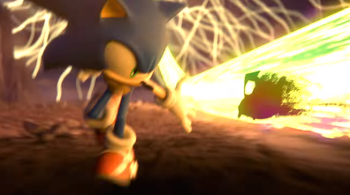 "I'm supposed to be the fastest, but I was too slow to save my buddy."