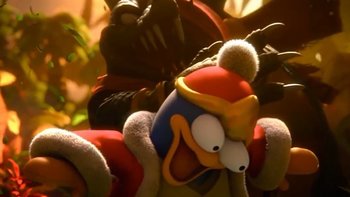 "That ugly ol' reptile don't scare me none!"
"Are you sure about that, you preposterous penguin?"

Everyone is here... to provide the laughs!

For Palutena's Guidance in this game, see the Smash Taunts page. For examples throughout the series, check this page.