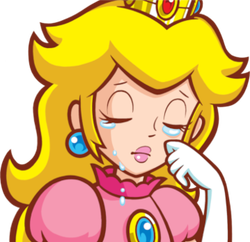 What kind of incident was sad enough to make Peach cry?
"Fail 'You're The Inspiration'? Are you insane, or just evil? I've done many questionable acts in games, but let that poor little girl down? I draw the line there. Cut off my hands, and I'll beat the level with my stumps. I. Will. Not. Fail. Her."
— This page's section for Elite Beat Agents
Advertisement:

For the most tearjerky-ness, listen to this

Some people may argue that video games can't be art. Others say that they could be, but haven't achieved that status yet. Perhaps scenes like this may change their minds...

Note: If a game has its own Tear Jerker page, add examples to it there rather than here.