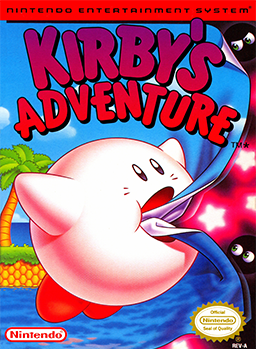 "What would Dream Land be without dreams? A nightmare!"
Kirby: Nightmare in Dream Land 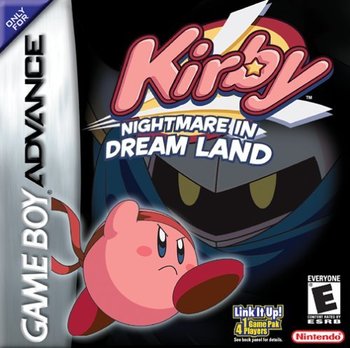 "A hero with a taste for adventure!"
One day, the peaceful life of Dream Land was shattered by a mysterious crisis! The inhabitants didn't dream!
On the edge of Dream Land, dreams and hope once gushed forth from the Dream Spring, fueled by the Star Rod.
Investigating the Dream Spring, Kirby found naughty King Dedede swimming in its magical waters!
Dedede had broken the Star Rod and given the pieces to his friends, who are now hiding in Dream Land!
To bring back the lost dreams, Kirby sought the Star Rod!
— The game's story, given in its Attract Mode
Advertisement:

Kirby's Adventure (known in Japanese as Hoshi no Kirby: Yume no Izumi no Monogatari, or "Kirby of the Stars: The Story of the Fountain of Dreams") is a 1993 NES Platform Game in the Kirby series and the second Kirby game overall.

One day, everyone in Dream Land suddenly lost their ability to dream! King Dedede was behind it — he stole the Star Rod, broke it into seven pieces and gave each one to his friends. Now, it's up to Kirby to beat them all, retrieve the pieces, and reassemble the Star Rod to bring everyone's dreams back.

Directed by series creator Masahiro Sakurai, this game introduced Kirby's now-signature Copy Abilities, which allow Kirby to copy special powers from enemies that he has eaten. The game also expanded on the level designs, taking advantage of Kirby's then-new abilities.

Noted for being one of the most technically impressive games officially released for the NES. Due to coming out extremely late in the system's lifespan, the programmers had fully learned how to squeeze as much power out of the system as possible - the end result being a game filled with colorful, highly detailed art and extremely impressive visual effects. The rotating towers within the "Butter Building" area

are especially noteworthy. It's also an early example (albeit far from the first) of a game with a major Plot Twist, as what seems to be a fairly simple Excuse Plot takes a turn when it's revealed that Dedede had very good reasons for breaking the Star Rod.

The game was first remade as Kirby: Nightmare in Dream Land (Hoshi no Kirby: Yume no Izumi Deluxe, or "Fountain of Dreams Deluxe" in Japanese) in 2002 on the Game Boy Advance with upgraded visuals and music, along with different minigames. It was notably the last Kirby game that Shinichi Shimomura (a longtime level designer for the series and director of the "Dark Matter Trilogy") contributed to before his sudden disappearance from public eye; he served as co-director alongside Sakurai. A more faithful remake was released in 2011 for the Nintendo 3DS as 3D Classics: Kirby's Adventure, with autostereoscopic 3D support, graphical clean-ups and revised controls to fit the different control layout.

Its original form was included as part of Kirby's Dream Collection: Special Edition for Kirby's 20th anniversary in 2012, as well as given a Wii U Virtual Console release in 2013.

Not to be confused with the fan comic Kirby Adventure or Kirby's Adventure Wii, which is the European title for Kirby's Return to Dream Land.

Tropes used in Kirby's Adventure and Nightmare in Dream Land:

In "Something About Kirby's Adventure", Kirby uses a chainsaw to defeat Whispy Woods, and the two part ways before leaving Vegetable Valley. The chainsaw later shows up at Yogurt Yard, although very briefly on the left.

In "Something About Kirby's Adventure", Kirby uses a chainsaw to defeat Whispy Woods, and the two part ways before leaving Vegetable Valley. The chainsaw later shows up at Yogurt Yard, although very briefly on the left.