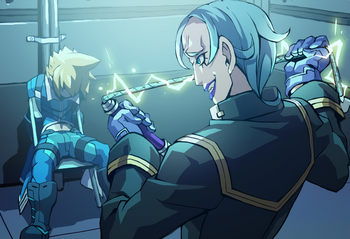 So, you want to Whip It Good, but a normal whip just isn't good enough. So what can you do about it? Easy, just add electricity. For some reason, whether it be the way a whip resembles an electrical wire, the length and thinness matching a lightning bolt well, the crack of a whip sounding like thunder, or just simple Rule of Cool, whips tend to be associated with electricity. Most often seen in Science Fiction, though also possible in Fantasy, these whips tend to have two major variants

If they are not magical or integrated into Powered Armor or a Mecha, they'll usually have the battery in the handle, which will be the only thing safe to touch. Likely to overlap with Variable-Length Chain, especially in type 2 since the lack of a physical chain makes it easier for it to change lengths, though type 1 may be Handwaved the same way as any other Variable-Length Chain.

Obviously a subtrope of Whip It Good, as well as Shock and Awe, and Enhanced Archaic Weapon. Likely an Elemental Weapon in setting with elemental powers. Can also overlap with Chain Pain. Although not the same as Chain Lightning, it may have this effect as well.