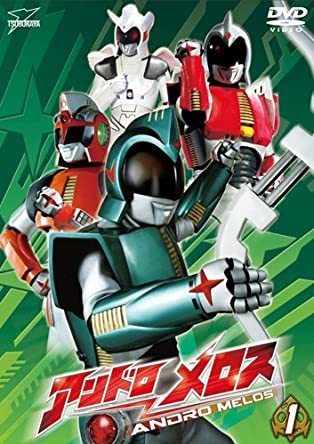 Character name clockwise: Andro Frohl, Andro Wolf, Andro Melos and Andro Mars.
Andro Melos is a Tokusatsu miniseries, part of the Ultra Series that aired from February to April 1983 on weekdays. After the end of Ultraman 80 in March 1981, the Ultra Series entered a period of hiatus for 15 years. The first of which to fill in that void was the Ultra Brothers Story Andro Melos magazine and Ultra Super Legend: Andro Super Warriors manga publications, featuring the Ultra Warriors and the Andro People's fight against the Guar Army. After its popularity, a miniseries was made to feature the Andro People's exploits against the Guar Army. The 1984 film Ultraman Story was made to further promote Juda, one of the siblings of the ruling Guar Army leaders.
Advertisement:

Ultra Brothers Story Andro Melos and Ultra Super Legend: Andro Super Warriors both feature the events in the aftermath of Ultraman 80, where Zoffy was thought to be killed by an empowered Ace Killer and gets thrown into a black hole. In his place, a green-armored warrior named Andro Melos appear to fight the Ace Killer and eventually helping out the Ultra Warriors and the Andro People in their fight against Guar Army. After the battle, it was revealed that Andro Melos is actually Zoffy, who survived the black hole when the green Cosmo Techtor armor was given to him by the Andro People Caesar, dying in the black hole in his place. Zoffy gave the armor to Caesar's son, Benoit, who also inherited the name "Andro Melos".

Fast forward to Andro Melos, it focuses on Benoit's exploits as Andro Melos, the leader of the Andro Defense Force. Under his leadership are Andro People dressed in different-colored Cosmo Techtors as they fight against the tyranny of Guar Army and their minions.

Andro Melos is in fact the first Tokusatsu in Japan to receive a home video treatment. The protagonist's name, Andro Melos, came from The Ultraman manga 1975 featuring an Ultra named Melos, who in fact uses the Cosmo Techtor armor. However, "Andro Melos" and "Melos" are entirely different characters altogether.