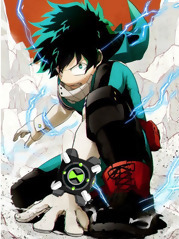 One would think that in a world where everyday people possess impossible abilities nothing would really be a surprise. Izuku Midoriya, who upon the age of four was diagnosed as Quirkless, was denied of his dream of becoming a hero that can save everyone with a smile. But fate gives him a chance; allowing him access not one but a universe of powers and abilities.

(alternate link to Archive of Our Own here

in which instead of gaining One For All Izuku Midoriya discovers the Omnitrix and becomes a hero with the powers of aliens.

Currently stands at 37 chapters and one bonus chapter.