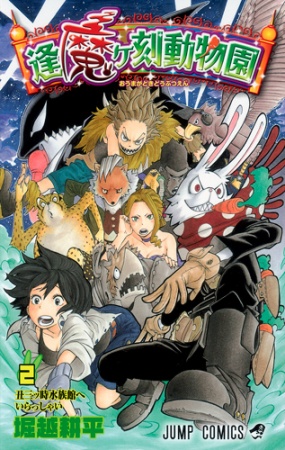 Oumagadoki Doubutsuen ("Oumagadoki Zoo") is a manga by Kohei Horikoshi. Klutzy high school student Hana Aoi wants to prove that she is more than a good-for-nothing and decides to find a part-time job. Her dream is to interact and take care of animals, so finding a job at the zoo seems like the perfect place. She happens to find work at an isolated and run-down zoo that never gets any customers. The place is run by a man named Shiina, who was turned into a rabbit by a spirit and will only turn back if his zoo becomes the most popular one in the world. Because of this curse, he has also gained magical powers, which he uses to turn all of the zoo animals into a Little Bit Beastly humans during closing time. Now they have various adventures as they go around attempting to make the zoo popular.

The manga was Horikoshi's first published work; it was serialized in Weekly Shonen Jump from July 2010 to April 2011, being unfortunately Cut Short after only 40 chapters which were compiled into five volumes. Characters from this manga would later be transplanted into Horikoshi's later series My Hero Academia as minor supporting characters, albeit with different roles (i.e being animal themed heroes rather than be animals that can turn into humans). The gesture would later be seen as a return favor, interestingly enough, as the last volume of Oumagadoki published a reprint of the latter manga's inspiration, My Hero.