Comic Book / The Terror of Trigon 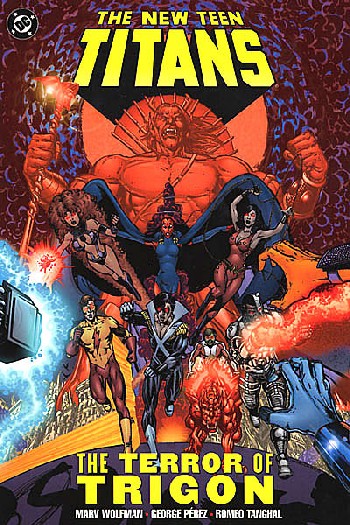 The Terror of Trigon is a story arc of the Teen Titans, during the Wolfman-Perez era.
Advertisement:

The Titans were reunited by Raven, who had been seeking help against her demon-father, Trigon. The Titans exiled Trigon into another dimension in the early issues, but, as things continued, Raven had to struggle to keep her Power Incontinence at bay. One day, all hell broke loose — and we mean it!

One day, after a mishap in training, Raven announces she will leave the team the following night. The Titans are worried, but don't know how to help her. Jericho tries an alternative approach: possessing Raven's body while she's sleeping. He is transported to Trigon's dimension, where Trigon is ready to give him A Fate Worse Than Death. Then Raven appears and somehow, shaken but alive, Jericho returns to Titans Tower. However, Raven is nowhere to be found, and all the skies on Earth have turned dark.

Lilith turns up, wanting to help the Titans. They try to summon Raven's soul, with the help of former Kid Flash, Wally West, who had previously left the team as his super-speed was killing him. The summoning fails, and the Titans are instead pulled to Azarath, Raven's home dimension, which has just been destroyed by Trigon. In the meantime, Trigon himself shows up on Earth, along with Raven, who has been corrupted by her father's power.

By the time the Titans return to Earth, Trigon has taken it over and corrupted it. Raven sends the Titans into an illusion, where they fight against evil versions of themselves. As each Titan is pushed to the edge and kills their dark halves, they are corrupted themselves. But Lilith takes control of the evil Titans, using them to kill Raven. When it is done, the Titans are cleansed and return to normal, and try a last-ditch attack against Trigon. Azar manifests through Lilith and instructs Arella on what she has to do with Raven's corpse. They release her soul-self, now cleansed of Trigon's evil and reinforced by the souls of the dead Azarathians. Raven's white soul-self slays Trigon, Raven herself reappears for a moment and disappears, and everything is soon back to normal...except nothing is. Raven is now dead, Trigon is no more, and Titans Tower has been obliterated.

The Terror of Trigon contains examples of: