Comic Book / The Origin of Lilith 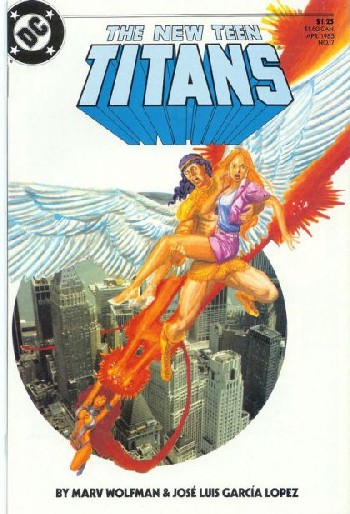 What, can't a winged man from out of nowhere fall in love and kidnap a girl without superheroes ruining everthing?
The Origin of Lilith is a storyline of the Teen Titans, with the origin of Lilith. It was made in 1985 by Marv Wolfman and José Luis García López.

Some months ago, Lilith was present when a humanoid alien with wings came out of a ship, with no memories, and fell in love with her. Lilith began to burn, the Titans drove the winged man away, but Lilith does not blame him: she actually had a problem of "burning" since many months before. Still, the deed was done. The winged man roams the city crying for Lilith, and saw her on TV after the events of The Terror of Trigon. He reunited with her, who was with Starfire and Jericho.

Thia, the evil director of "Sun Publishing Inc.", reveals herself as the goddess of Sun, one of the Titans of Myth. She suddenly discovers her lost daughter... yes, you guessed it: Lilith. She took her from the Titans and left to Olympus, and defeats all the gods by herself. When the Titans realize her identity they head to Paradise Island to seek the aid of the Amazons, but they are all gone. Using the Oracle, they find out her wereabouts, and head to Tartarus to recluit the Titans of Myth. The Titans of Myth, the Titans and the gods of Olympus free the Amazons from the crystal castle of Kole (a servant of Thia), fought Thia's Tifon, and finally Hyperion (her husband) killed her, killing himself in the process.

Titans and Amazons are allowed to return to Earth; but not Lilith. She's a god, and she belongs in Olympus.

The origin of Lilith contains examples of: