Comic Book / Who Is Wonder Girl? 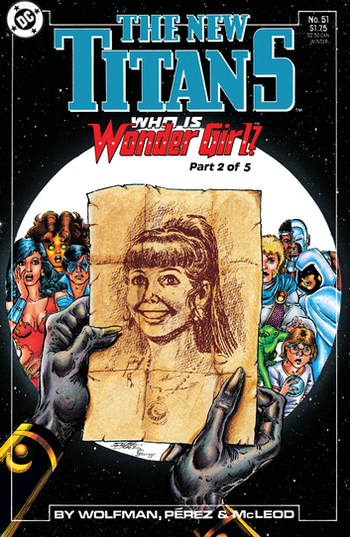 Who is Wonder Girl? is a story of the Teen Titans. It sets a new Origin Story for Donna Troy, as Who Is Donna Troy? had become a canon discontinuity with Crisis on Infinite Earths.
Advertisement:

It began with a hooded woman searching for Donna Troy, who arrives just in time when the Titans were attacked by strange aliens. With just her sight she unlocked Donna Troy's memory: everything that had happened to her after being rescued from the fire was false. The woman revealed to be Phoebe, the godness of the moon, one of the Titans of Myth. They had rescued several doomed children from different planets, turned them into demigods (which they called "seeds"), and returned them to their home planets with their training removed from their memory. But one of them, Sparta, retained her memory and went mad. She attacked New Chronos, but unable to defeat the Titans, she sent those aliens to kill the other seeds. Phoebe died after telling her story.

The titans divided in two teams, and used the spheres from Phoebe and the aliens to move to the other planets. The spheres could turn into portals to small spaceships (bigger in the inside). Donna, Raven and Changeling located Xanthi, who joined them, and then headed to New Chronos, where they met the aged Titans of Myth. Nightwing, Cyborg, Starfire and Jericho found Athyns, but things were a bit more difficult: they arrived with the aliens, who destroyed his world, and Athyns thought that they were either all toguether, or bringing their wars to his planet. Worse yet, he took control of the think (which was controlled by will power), which was attacked by Sparta before arriving to New Chronos. They landed in the planet below, and Raven and Xanthi tried to rescue them. They did so, and Xanthi unlocked the memory of Athyns, but then Sparta killed Xanthi. They managed to bring her to New Chronos, and with 3 seeds the Titans of Myth could restore their power, undo Sparta's madness and restore the world she had ravaged. And, as a final gift, they gave a new suit to Wonder Girl, who also changed her name and began to name herself Troia.

Who is Wonder Girl? contains examples of: