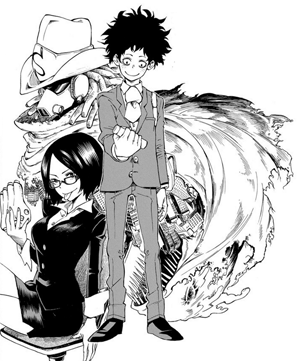 In 2008, novice mangaka Kohei Horikoshi submitted a oneshot to the magazine Akamaru Jump, detailing a world suspiciously like the ones in Superhero comics. Powered folks are publicly recognized as "Heroes", fighting against twisted monsters known as Aberrants and keeping the city streets safe.

Enter one Jack Midoriya, one of the few non-powered people living in this world. Wiry, anemic, but full of determination, Jack makes a living as a sales associate for Akahashi Hero Support, a company that offers gadgets for heroes to use. Despite nearly everything about him making people put his dream to be a hero down, he secretly tries to moonlight as a vigilante, using the tools from his job as his own. One late night mishap earns him the ire of resident hotshot Snipe, mocking Jack for playing hero and dissing his inspiration Positive. Jack declares him an enemy and makes it his mission to prove him wrong.

When another Aberrant starts rampaging through town, Jack (under the guise of a sales run) decides to beat Snipe to the monster and take it out on his own – but it injures him brutally and leaves, prompting Snipe to try finishing it off. Jack’s director finds out about his secret and the pair have a heart-to-heart, but it’s cut short when the monster gets out of control and Snipe himself gets incapacitated in the process. Faced with a dire situation, it’s up to Jack to get back into the fray and learn a whole new way to become a hero...

The oneshot was reprinted in the fifth and final volume of Oumagadoki Doubutsuen, where Horikoshi remarked that he'd like to write it all over again because of how much it meant to him... and boy, did he ever.

Tropes present in the oneshot: