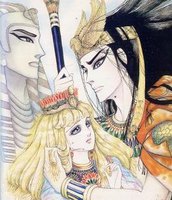 Carol and Memphis
Crest of the Royal Family (Ōke no Monshō), is a shōjo manga by Chieko Hosokawa. It has run in the monthly magazine Princess since 1976, and it got the 1991 Shogakukan Manga Award for shōjo. It also had a vomic (voice-over comic with music, voice acting, and some limited animation) and a musical adaptation in 2016.
Advertisement:

The main character is Carol Lido, an American teenager from a wealthy family with an interest in Egyptology, studying in Cairo. When her mentor discovers the tomb of a young pharaoh, a curse is put on the excavation team and Carol. The curse sends her back in time to ancient Egypt, where she becomes embroiled in the affairs of Egypt and other ancient countries such as Assyria and Babylonia.

Once in Egypt, Carol meets Memphis, the handsome young pharaoh whose tomb she excavated in modern times. Despite his headstrong, initially violent nature, they fall deeply in love. This angers Memphis' half-sister, the priestess Isis, who has longed to marry him. Carol, due to her exotic looks and curious ability to tell the future, becomes a major player in ancient history as she attempts to survive, being a fawn surrounded by lions who has to develop a backbone to keep herself alive...

Compare with Red River (1995), where a Japanese girl named Yuri gets tossed into the Hittite Empire (located in what we know as Turkey now) instead and Sengoku Strays where a first year high school girl named Kasane Kusanagi is transported to the Sengoku era.