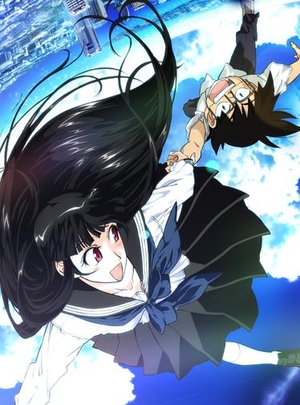 Natsu no Arashi! ("Summer Storm!") is a manga by Jin Kobayashi, creator of School Rumble, which was serialized in Gangan Wing from 2006 to 2010. It was adapted into an anime in the spring of 2009 by Studio Shaft, with a second season, Natsu no Arashi! Akinaichuu.
Advertisement:

Hajime Yasaka goes to stay with his grandfather over the summer in a small town. While he's there, he meets a girl, Sayoko Arashiyama. "Arashi" for short. When the two join hands, Arashi reveals that she "connects" with Hajime, and that she is also a ghost. When they connect, Arashi and Hajime can jump through time, which Arashi uses to show Hajime the past and, with his help, to correct it. In the present, she gets to know the modern era and work with the colorful cast of people at the cafe Hako-bune ("Ark", e.g. Noah's).

Tropes in Natsu no Arashi! include: