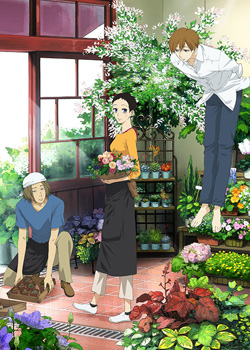 Rendezvous") is a manga series by Haruka Kawachi. It ran in the Josei magazine Feel Young from 2009 to 2012.

Hazuki Ryousuke is a young man completely smitten with Shimao Rokka, a widow who owns and operates a small florist shop. He goes so far as to take a part-time job at her store just to be with her more. But just when things seem to be progressing romantically, the ghost of Rokka's husband Atsushi starts interfering. If Hazuki wants to be with Rokka, then both she and Atsushi will have to overcome their lingering attachment issues...

An anime adaptation aired as part of the Summer 2012 Anime season in the noitaminA block. It is available on Crunchyroll