Manga / Ouji to Majou to Himegimi to 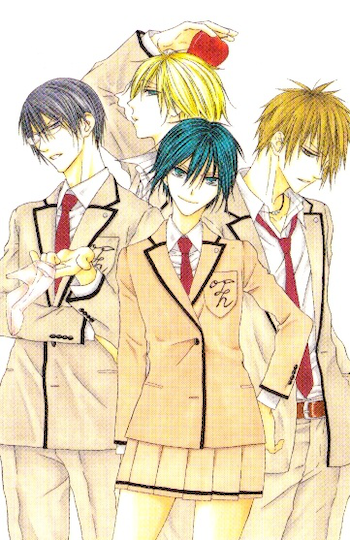 This is a story about princes chasing after a princess... or is it the other way around?
Advertisement:

Ouji to Majou to Himegimi to ("The Prince, The Witch, and The Princesses") is a shoujo manga series by Kou Matsuzuki, which ran in Hana to Yume from 2009 to 2014.

The story centers around Ooji Subaru, a bifauxnen young girl that looks like a handsome prince, transferring from an all-girl to a co-ed school along with her childhood friend, Megumi. The school is well-known for its Bishōnen "princes" of all sorts whom Ooji befriends and easily fits in with, only to learn that they already know her...well, sort of.

The "princes" are actually reincarnated princesses who all fell in love with the same prince, Ooji's past life. But before he could choose one, all were cursed by a witch to reverse genders in their next lives. So now the princes(ses) are back and continuing their pursuit of the prince(ss), Ooji.

Mix in characters from other fairy tales showing up to claim her, and Hilarity Ensues.