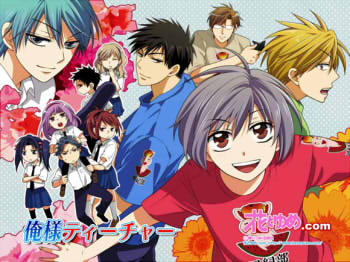 The Absurdly Powerful Student Council and The Disciplinary Club
Advertisement:

Kurosaki Mafuyu is an ex-delinquent who was expelled from her school and shipped off to a new school by her mother. Now that she has transferred to a new high school, she's determined to become an ultra-shiny, super feminine high school student and make as many friends as she can!.

But with a new friend like Hayasaka-kun, and a homeroom teacher like Saeki Takaomi, who forces her and her new friend into the Disciplinary Club...

Will Mafuyu be able to live a girly-girl high school life!?... Or once again she will have to stand up and fight for her friends!?.

Ore-sama Teacher is a long running shoujo manga penned by Izumi Tsubaki. Beginning in 2007, the series was serialized monthly in Hana to Yume for all of its run until its conclusion in 2020.

Not to be confused with the 2004 film Oresama.