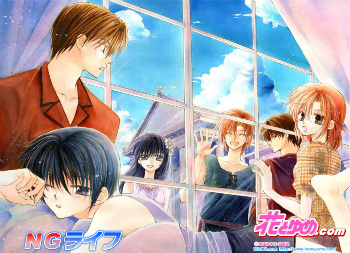 A shoujo manga based on the age-old tale of reincarnated lovers... with a twist.

Keidai Saeki, average Japanese high school student, remembers living an entirely different life as Sirix, a gladiator in ancient Pompeii; this means he has a hard time existing in the present, especially when no-one else seems to have memories of their own. Keidai exists in two worlds, one of which is long dead: His little sister in his past life is married to his former rival and they're now his parents, his male best friend is a cute girl with a crush on him, and his beloved wife Serena has been reborn as the short-tempered boy next door who's crushing on said best friend! And of course, Keidai is literally incapable of seeing them as anything but their past-life selves.

Life for Keidai is essentially a twenty-four-hour Mind Screw.

NG Life is a romantic dramedy by Mizuho Kusanagi, the mangaka responsible for Mugen Spiral, Yona of the Dawn, and Game×Rush. It ran in Hana to Yume from 2005 to 2009. Licensed for North America and published in English by TOKYOPOP, all nine volumes have been released as of July 8 2011.