Manga / Never Give Up 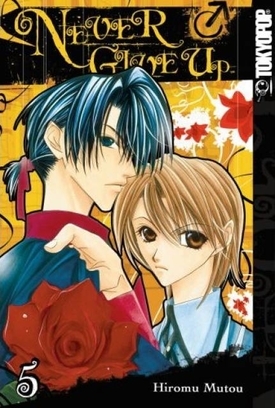 The prince dreams of becoming a princess...
Advertisement:

If you were looking for the trope, that's called Determinator now.

High school student Kiri Minase looks like a supermodel, often acts like a fairy tale prince, and is wildly popular with the local schoolgirls- several confess their love every week. Problem is, Kiri is a (straight) girl. She hates having inherited her model dad's looks, and has tried all her life to become girlier (which hasn't worked too well). She only acts princely to girls who confess their love because she knows what unrequited love is like and doesn't want to hurt them- otherwise, she acts like a normal teen girl.

She's in love with her neighbor, the effeminate Tohya Enishi, and has been ever since they were young. One day, Tohya decides he wants to become a male model with Kiri's mother's agency. In order to stay close to him, Kiri decides to become a model, too... But there's a catch. Her mother will only hire her as a male model, going by the alias "Tatsuki."

And then, people start falling in love with Kiri, Tatsuki, or sometimes both at once... Drama, romance, and of course, much Hilarity Ensues.

Also known as "NebaGiba!," it was written and illustrated by Hiromu Mutou, and ran in Hana to Yume from 1999 to 2007, spanning 13 volume. Only 8 volumes have been translated by Tokyopop before their shutdown in 2011.