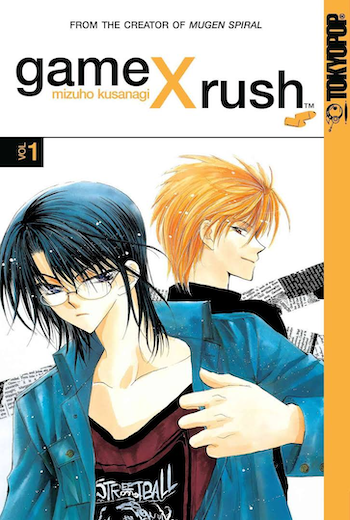 Game X Rush is the story of a young bodyguard named Memori, an enigmatic boy named Yuuki, and their respective mysterious pasts. The manga manages a good blend of comedy and action/drama as stalkers, babysitting and more require their combined talents, but the drama kicks in once the story begins to focus on their complicated backstories.

A two-volume humor/action/drama Shoujo series, Game X Rush is the work of Mizuho Kusanagi, the mangaka responsible for Mugen Spiral and NG Life. It ran in Hana to Yume from January to August in 2005. Despite being shoujo, Game X Rush has no traditional female lead or love-interest: The plot can best be described as tracking the bromance between a bodyguard and the assassin who decides to stalk him. Despite that description it's not Yaoi or Shounen-Ai, though it often plays with the hallmarks of the genre. Volume One is heavy on the comedy; the end of Volume One and most of Volume Two are tarred with the brush of drama.

Game X Rush is published in English by TOKYOPOP, and both volumes have been released as of November 2009.