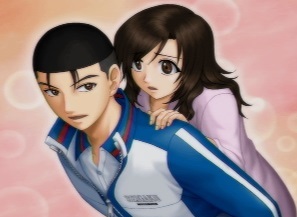 They're so cute, they even get Bishie Sparkles!
Advertisement:

A cutesy way of showing romantic Ship Tease fanservice for a couple where one partner carries the other on their back. Common element of a Falling-in-Love Montage.

This is an important trope for many Korean Series as a "clean" way to show attraction between two people.

Because this isn't limited to romantic couples, this can also happen between siblings, or even between parents and children.