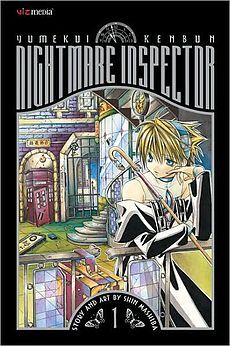 "Sleep now, and leave this world behind..."
Advertisement:

Yumekui Kenbun (夢喰見聞) or Nightmare Inspector: Yumekui Kenbun in the English translation, is a Shōnen Horror series written and illustrated by Shin Mashiba, set in the end of the Taisho era. It takes place mostly in Ginseikan (Silver Star in English), the teahouse run by Mizuki Asahina. The manga began serialization in the shoujo magazine Monthly Stencile from 2001 to 2003, but later moved to the shonen magazine Monthly G Fantasy, where it ran from 2003 to 2007.

When a person has nightmares they go to Hiruko, a Baku, for help. Hiruko helps people by entering their nightmare with them with the help of his supernatural cane that puts them to sleep, and helping to sort the nightmare out before taking it to eat for himself. Hiruko has a preference for painful nightmares and will do anything to get one.

The series takes place over the course of nine volumes and is mostly episodic, and each chapter sees Hiruko helping a new client discover what their nightmare means. There is an overarching story about the origins of the baku and the histories of the Silver Star's residents Hiruko, Mizuki, and Hifumi, but the emphasis is on the customers.