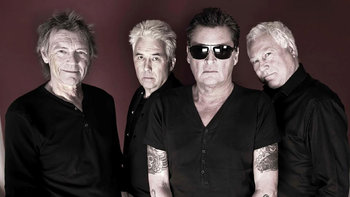 I've been drivin' all night, my hand's wet on the wheel,
There's a voice in my head that drives my heel,
It's my baby callin', says I need you here,
And it's a half past four and I'm shiftin' gear,
When she is lonely and the longing gets too much,
She sends a cable comin' in from above,
Don't need no phone at all.
"Radar Love"
Advertisement:

Golden Earring is a Dutch Hard Rock band formed in 1961, making them the longest runner when it comes to Rock music. They had two big hits with "Radar Love" (1973) and "Twilight Zone" (1982) and enjoyed general international success in the '70s and '80s; other songs, such as "Candy's Going Bad", "Instant Poetry", "Sleepwalkin'", "The Devil Made Me Do It", "Quiet Eyes", and "When the Lady Smiles" were smaller hits. They are the most successful Dutch rock act by a fairly large margin.

in February 2021; not wanting to replace him, the band decided to split up.

Troper of the Night: