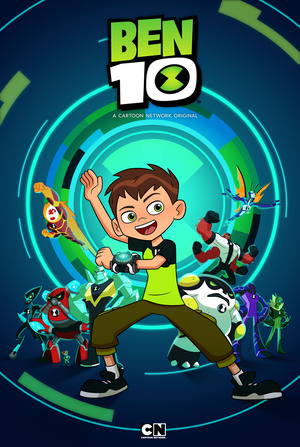 Once more around the Ben.
Advertisement:

Ben 10 (2016) is the fifth iteration of Cartoon Network's Ben 10 franchise following Ben 10: Omniverse, and a Continuity Reboot for the entire franchise. It is also the first installment since the original series to have series creators Man of Action Studios deeply involved in its production, now serving as showrunners as opposed to creative producers.

Taking a "back to basics" approach, the show follows 10-year-old cousins Ben and Gwen on a summer road trip with their Grandpa Max, having various adventures across the United States (and later the world), fighting a myriad supervillains and aliens using an alien watch called the Omnitrix, which got stuck onto Ben's wrist some time shortly before the show started.

In a departure from all prior iterations, the reboot is a quarter-hour series; while it maintains an overarching Myth Arc, it places a heavier focus on comedy and slapstick than any other installment.

The series premiered in most European and South Asian countries in October 2016 as a result of the franchise's huge popularity in those regions, while the United States would begin airing the series months later on April 10, 2017. A Grand Finale television movie entitled Ben 10 Versus the Universe: The Movie, aired on October 10, 2020, though the show would also see a series of three one-hour specials air from April 9 to April 11, 2021, with the final one being an Intra-Franchise Crossover called Alien X-Tinction.