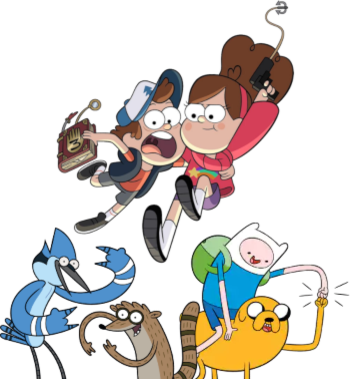 Round eyes, simple designs, and a feeling of motion.note Top, left, and right: Gravity Falls, Regular Show, Adventure Time
"You'll also notice that the designs of many of these characters is much more simpler than ones of the past. They do this 'cause it gives way to faster animation, while also allowing more time to focus on color, backgrounds, and of course, the story."
— The Nostalgia Critic, Are Kids Shows Better NOW Than Ever?

Thin-line animation is a stylistic trend that has emerged in The New '10s based more around thinner lines, rounder shapes and noodle-like appendages. All while still being distinctively western. This style may have emerged for a number of different reasons. The emergence of anime and their influences on western cartoonists have made them focused less on detail. Different coloring techniques with digital art may have removed the need for thicker lines, and thus it only remains when it's a stylistic choice. The need for quicker, cheaper animation after the economic downturn may also drive the desire for more cheap, yet still pleasing animation styles. It also may be due to the widespread adoption of high-definition (HD) televisions - before HD, small features such as thin lines in an image tended to flicker and/or disappear depending on their angle and motion; HD allowed the freedom for this new, previously unattainable style.

It is also known as the "CalArts Style", a pejorative term originally coined by The Ren & Stimpy Show creator John Kricfalusi regarding how certain animated films and many animators in The '90s heavily copied Disney's animation and art style, which has since morphed into any show from the 2010s and 2020s that uses this style that one considers "samey-looking", despite similar art styles in animated works being the norm since the creation of animation. Though the term tends to be used more specifically for works that not only have thin lines and round shapes, but also bean-shaped heads, bean-shaped mouths and worm-like teeth, so works that have the former but not the latter don’t tend to get labeled as such.

Thin-line animation is actually Older Than Television, since many cartoon shorts during The Silent Age of Animation (particularly those made by Disney and Max and Dave Fleischer) featured rounded ball-and-noodle art-styles and thin outlines. However, it was often done out of necessity since the simplistic designs made things easier on the animators at the time.