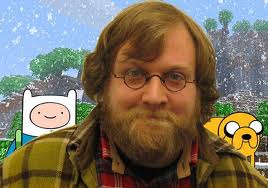 Ward Taylor Pendleton Johnston (born September 23, 1982 in San Antonio, Texas), known professionally as Pendleton "Pen" Ward, is best known as the creator of Adventure Time and Bravest Warriors, as well as the co-creator of The Midnight Gospel.

His official site is here

Other works Pendleton Ward has worked on:

Tropes Associated With Pen Ward and his Work