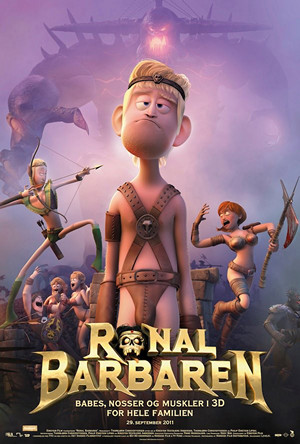 Young Ronal is the feeblest and most pathetic of the Sons of Kron, a fearsome barbarian clan. Lacking both well oiled muscles and the balls (well he kinda does but, not those kind of balls) to go on dangerous quests (not to even mention piercings and tacky tribal tattoos), he's picked on by almost everyone else except his uncle who tries to motivate him to be a real barbarian. However when Volcazar kidnaps the whole barbarian clan in order to carry out a blood ritual to enslave the whole world, Ronal has to go on definitely-not-a quest to find Kron's sword, the only weapon capable of wounding Volcazar and free the other barbarians. In his journey he meets Alibert the bard, Zandra the psychotic shield-maiden, Elric the elf, several instances of groin injury, lots of profanity and several jokes about sword and sorcery fantasy genre.

Multiple times in the movie, powerful warriors have struck Volcazar to no effect.

Multiple times in the movie, powerful warriors have struck Volcazar to no effect.