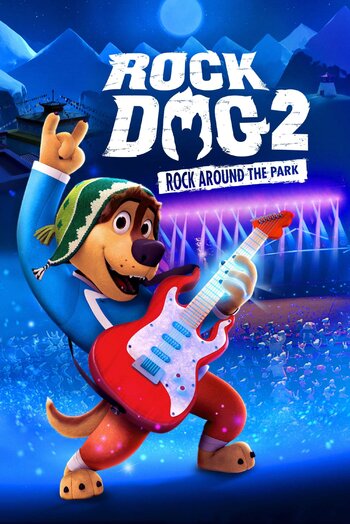 Rock Dog 2: Rock Around the Park is a 2021 Chinese/American animated film, and is a Direct to Video sequel to the 2016 movie, Rock Dog, which is very loosely based on the graphic novel, Tibetan Rock Dog by Zheng Jun.

One year after the original film, Bodi and his band, True Blue, have become locally famous in the village of Snow Mountain — they even have devoted fans! But when a music mogul named Lang gives them the opportunity to tour with pop sensation, Lil' Foxy, Bodi and his friends learn that fame comes at a price, and ultimately discover that only by staying true to yourself can you unleash the power of Rock 'n' Roll.

The film is set to be followed by another sequel, Rock Dog 3: Battle the Beat, which is to be released sometime in 2022.