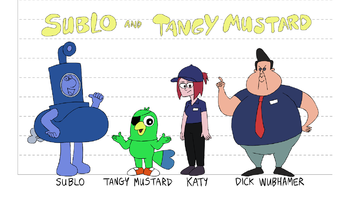 Sublo and Tangy Mustard is a web animated series created by Aaron Long (director on Bojack Horseman), first released in 2015. The series focuses on two guys who work as costumed fast food mascots at Subpar. The two are never seen without their costumes, even when they're elsewhere and not at work.

Other characters include co-worker Katy and their manager Dick Wubhamer.