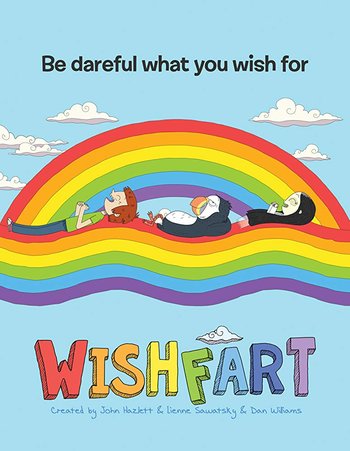 Left to right: Dez, Puffin, and Akiko
What’s a Wishfart?
It’s the first crazy wish you blurt out when you catch a Leprechaun!
Like a “brain fart” but with weirder consequences.
—The show's official website

Wishfart is an award-winning Canadian Fantastic Comedy cartoon series created by TV writers John Hazlett, Lienne Sawatsky and Dan Williams and produced by Wishfart Productions Inc.note a trademark registration established by the creators specifically to produce the show with in association with the world-famous Nelvana studio and its parent company Corus Entertainment (with Bejuba Entertainment managing the distribution rights). The series debuted in the United Kingdom on CITV in 2017 and later came to its home country in 2018 on Teletoon, running for a total of 40 Quarter Hour Shorts for a total of 20 half-hour episodes.

The series revolves around Dez, a reserved and awkward teenage leprechaun who lives in an unnamed magical city populated by all manner of fantastic beings. While Dez might not have a pot of gold, an Irish accent, or most of the other traits associated with leprechauns (and he takes pride in lacking those characteristics), he still possesses the ability to grant wishes, which he does by firing a rainbow from his finger whenever somebody asks him for a wish. While Dez is always happy to grant wishes for others, he has no control over his powers and their consequences. Any wishes he grants can and will always go out of control in the craziest manners possible. Naturally, it's always up to Dez to set things right, and joining him on his misadventures are his two best friends and roommates: a greedy and egotistical talking puffin named, well, Puffin and the gloomy and mischievous centuries-old ghost of a Japanese teenage girl named Akiko.

Yup, it's that kind of show, and damn proud of it. And you check out the official Youtube channel for this weird little series right here

When Dez's childhood brogues (brought to life by one of his wishes) demand he complete one last task on a list he made, Dez, Puffin, and Akiko do everything they can to get rid of the shoes.

Example of:
The Cat Came Back

When Dez's childhood brogues (brought to life by one of his wishes) demand he complete one last task on a list he made, Dez, Puffin, and Akiko do everything they can to get rid of the shoes.