This is the character sheet for the Canadian animated series Wishfart. 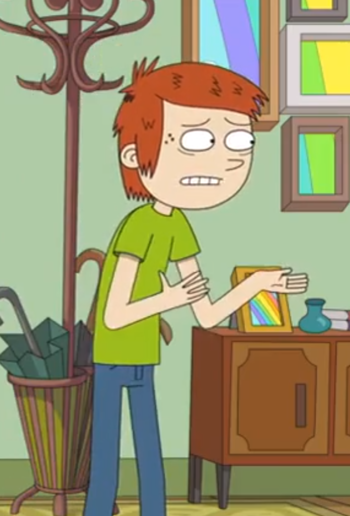 Our protagonist, an awkward but goodhearted teenager who also happens to be a proudly maverick leprechaun. Like all his kind, he possesses the ability to grant wishes by firing a rainbow from his finger. But no matter how much he tries to give others good wishes, any wishes granted by him go crazily wrong and it's up to him to set things right. 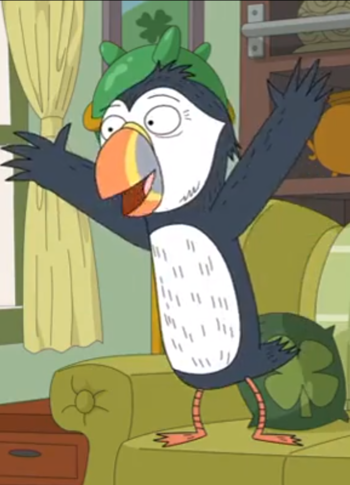 One of Dez's two best friends, a talking puffin who shares Dez's apartment home. He was once an ordinary puffin until Dez gave him sapience with his wish-granting powers. Although he's obsessed with food, wealth, fame, power, avoiding work, taking shortcuts, and having everyone pay attention to him, he values his friends even more than any of that. 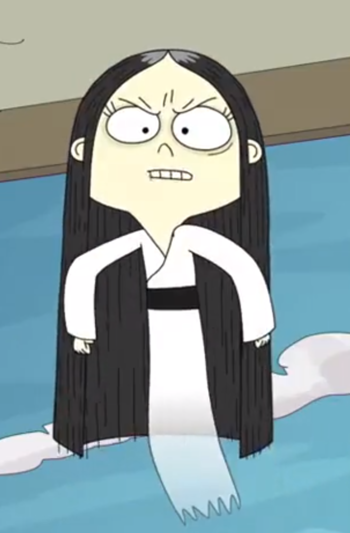 The other one of Dez's best friends, the ghost of a Japanese teenage girl who died nearly a thousand years ago of the plague. She haunts Dez's apartment and hangs out with him, bringing along her spooky powers, gloomy and sarcastic attitude, mischievous tendencies, and surprising wisdom and loyalty. Dez and Puffin often call her "Keeks" for short. 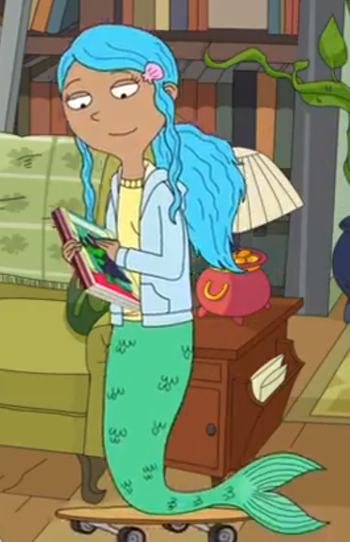 A blue-haired, brown-skinned mermaid whom Dez has a massive crush on. She's an friendly and easygoing girl who rides a skateboard wherever she goes for terrestrial locomotion and works at the local comic book shop. 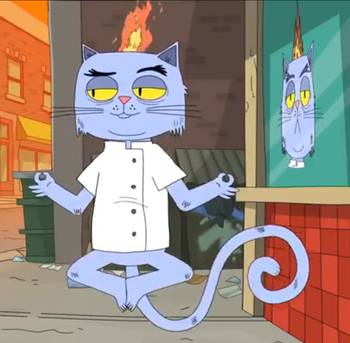 A magical anthropomorphic feline who owns a Chinese noodle soup shop that Dez, his friends, and many other characters hang out at. He is immensely wise and learned, making him pretty much the go-to guy whenever Dez and his friends need advice.

Advertisement:
The King of the Underworld
Voiced by: Brian Drummond 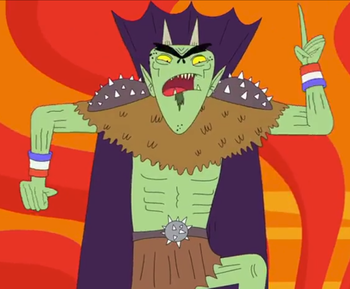 A giant terrifying demon and the ruler of the Underworld, where all ghosts and demons dwell. He semi-regularly antagonizes Dez and his friends, using his terrible powers and general unpleasantness to ruin their day. 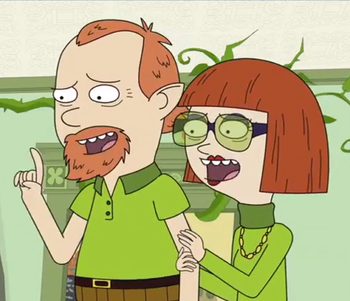 Dez's respective father and mother, who are also leprechauns. They're very nice people, even if they sometimes get on Dez's nerves. But as leprechauns, they're usually hiding away to avoid having to grant wishes. 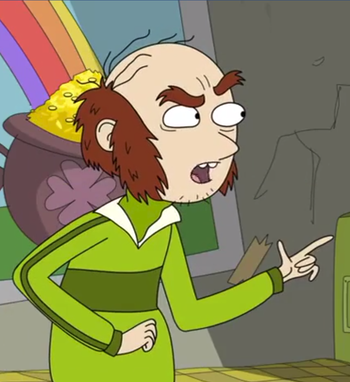 Dez's uncle and Emer's brother, who lives in a storage facility to hide from everyone. He is a bitter and greedy old man whose pessimistic and misanthropic attitude means that not even his own family is willing to spend long periods of time around him. 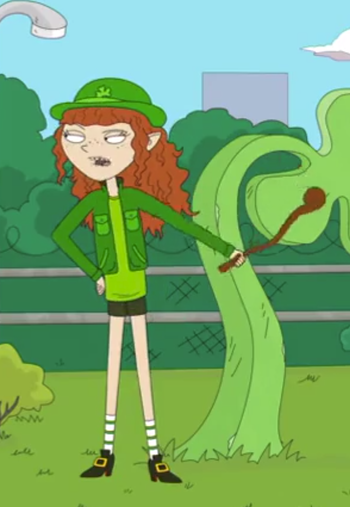 A female leprechaun of the same age as Dez. She is a leprechaun enforcer working at a leprechaun reprogramming facility run by her father Malachy, meaning it's her job to ensure other leprechauns are acting as they traditionally (read: stereotypically) should. She hates Dez and his unorthodox ways, but the feelings of antagonism are mutual. 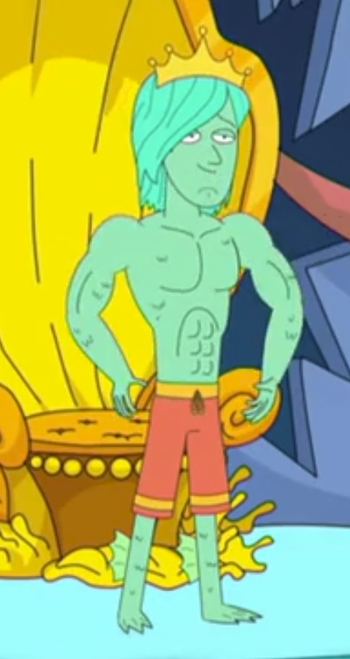 The God of the Sea himself, with absolute authority over all merpeople and sealife. A literal take on "Broseidon, Lord of the Brocean", he's a classic surfer-dude who loves himself more than anything else in the world. 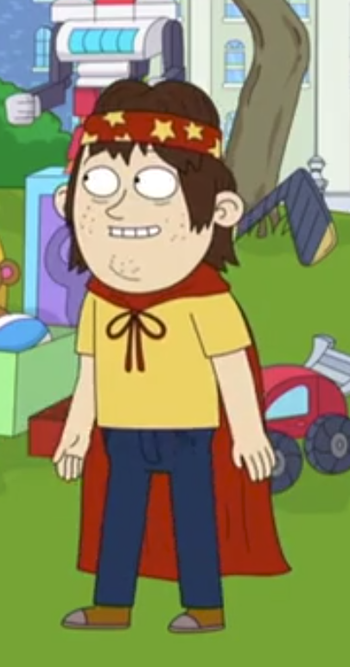 A bratty and obnoxious wizard boy who wears a red cape and bandanna patterned with stars. Selfish and whiny, he frequently annoys Dez, his friends, and nearly everyone else with his needy personality and magical mischief. 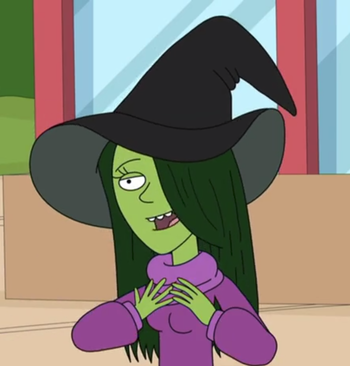 Your classic wicked witch, complete with green skin, a pointy hat, and all manner of evil curses and hexes. However, she cannot stand it when people make assumptions about her based on witch stereotypes - she follows them ironically. 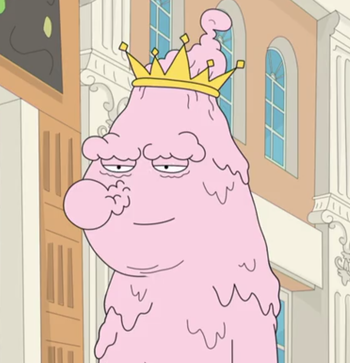 The self-declared king of all gum. He is a creature composed entirely out of chewing gum who came to be as a result of a wish Akiko made from Dez. He is Akiko's archenemy, but when not antagonizing her, he works various odd jobs.