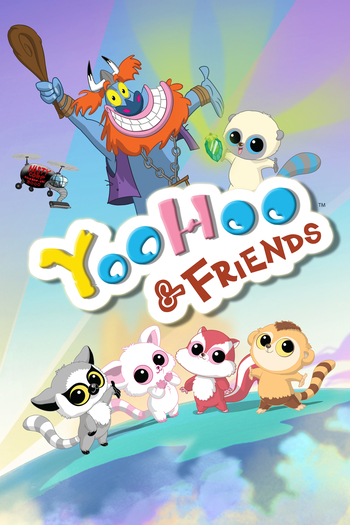 "Once Upon a Time, there were five executives who destroyed the Earth for money..."
"After Imagi, I was contacted by Konnie Kwak, the owner of Toonzone Studios (no relation). She brought me on, and gave me this Korean kid show "YooHoo & Friends" which she had acquired the rights to. She wanted me to make this really young Korean language kid show into something that she could sell to western TV. The style wasn't my style at all, and at first I was worried about what I could do with it. But then it occurred to me that if I approached it similarly to Woody Allen's "What's Up, Tiger Lily?," where a foreign language film is redubbed in english with an entirely different story, it could be funny. I proposed taking the existing 11 minute Korean shorts, and rewriting the dialogue, and creating 4 minutes of new animation per episode (cutting out 4 minutes of old footage). I created a brand new story arc, back story, etc..."
— David Feiss to John Pannozzi of Platypus Comix
Advertisement:

Once Upon a Time, there was an animated series based on a line of plush toys of the same name depicting many endangered animals, to help raise awareness of their situation. It centered around a group of five friends; YooHoo, Roodee, Chewoo, Pammee and Lemmee, attempting to fix the environment to continue growing their Trees of Life.

And then David Feiss, the guy behind Cow and Chicken and I Am Weasel, got his hands on it.

The result was several flavors of weird.

In the 2012 Gag Dub adaptation headed by Feiss, entirely new scenes now show how YooHoo and co. start out life as the executives of the company Nasty Corp, whose money grubbing schemes leave natural wonder after natural wonder devastated in their wake. As a result, Father Time, voiced by rapper Flavor Flav (yes, really) is tasked by his wife Mother Nature to do something about it. Father Time uses his magic to transform the executives into adorable little animals, and sends them on a quest to fix all their misdeeds, in return for gemstones. Once they get enough gemstones, they will be granted one wish; which they plan to use to become human again.

Each episode is also started by a narration from Father Time, as he finds certain problems in the past and tries (and usually fails) to fix them. Adding to the weird is the fact that Father Time's scenes are animated in the same style as David Feiss' previous work, while YooHoo and co. are animated in Adobe Flash.

YooHoo & Friends had its world debut on Cartoon Network in Latin America in January 2012 (and later channel hopped to Boomerang), with ABC3 in Australia and Pop in the UK premiering the show as well in English in the same year. The show wasn't a big success, and it never aired anywhere else internationally as planned. A merchandise line was also planned too, with plush toys, playsets, and light up dolls.

Eventually, the show wasn't renewed for a second season, which caused Toonzone Studios, the (now closed) company behind the adaptation, to take legal action against Aurora World. They lost, and the show started to fade into obscurity shortly afterwards.

YEAH, BOY! It's time for the tropes!

The YooHoos: We're one step closer to our wish!
Lemmee: I wish this page would end! *ding*