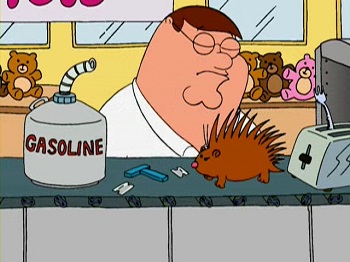 He's not asleep on the job! He has a bug trapped under his eye and he's trying to suffocate it.
"Should we initiate a recall?"
— Fight Club
Advertisement:

You've just made a new product! Why not test it yourself without a hazardous environment suit? Or better yet, put it into mass-production and release it to the public as soon as possible. Surely, nothing bad could come from something made on a budget. What Could Possibly Go Wrong? from a lack of clinical trials?

That cancer you got ten years later is probably unrelated, not to mention the injuries of all those children who tried to play with it, or those dead military personnel who looked at it funny. While Moral Guardians may be outraged, don't expect Neglectful Precursors or a Crapsack World to care.

Compare with Icarus Allusion, May Contain Evil, No OSHA Compliance, and My Little Panzer (where toys are proven to be exceptionally dangerous.) Contrast Disastrous Demonstration: when a product's dangerous properties reveal themselves during a promotional event.