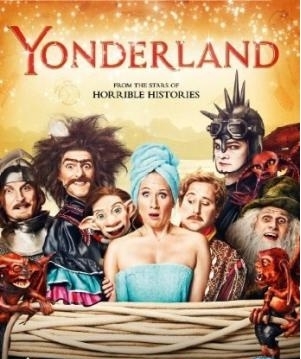 The premise revolves around very ordinary, very bored stay-at-home mum Debbie (Howe-Douglas). Her kids are off to their first day of school and she's trying to figure out what to do with herself... when an elf (voiced by Baynton) suddenly appears from a kitchen cupboard and announces that she's the Chosen One destined to save his world from the forces of darkness (and stuff), as represented by the villainous Negatus (Farnaby) and his demonic minions. Just intrigued enough to follow the elf — and Nick, the talking stick — back through the portal, Debbie meets with the Elders of the magical, mystical realm of Yonderland... only to discover that they've lost the scroll that explains what the Chosen One is actually supposed to do.

Yonderland, it turns out, is a very silly place indeed. Soon Debbie is off on a journey to find her fate that meanwhile finds her assisting, among others, "incompetent knights, monks who are incapable of lying and a race of people intent on firing the cleverest amongst them into the sun."

Take a look at the preview trailer,

and the Sky Yon 'news updates'

to find out more.