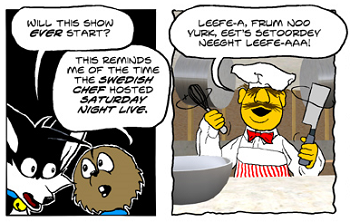 Cleveland: I hate shows that cut away from the story for some bullshit.
[cut to Adolf Hitler, juggling three fish while riding a unicycle]
—Family Guy, "Believe It or Not, Joe's Walking on Air"
Advertisement:

A Cutaway Gag is a joke generally found in sillier comedies in which a character says something and the action immediately cuts to a throwaway joke related to what the character said. The Cutaway Gag is usually a non sequitur which has absolutely nothing to do with the plot of the comedy. It is just there to be funny. If the gag is funny, no one minds the non sequitur. Of course, if it isn't...

A staple of the Gag Series, or those using Rapid-Fire Comedy (after all, it's easy to have lots of jokes if you don't need them to make sense).

These cutaways can be softened if there is a clear Narrator or Framing Device that imitates a person's Derailed Train of Thought, as instead of an interchangeable joke you still get an impression of linear development.

Compare Big-Lipped Alligator Moment, Imagine Spot, Crazy Memory, Product-Promotion Parade (which this can overlap with), Separate Scene Storytelling. Also an Aversion to the Noodle Incident, especially when they briefly start off with a bit of dialogue that would imply such a trope.

A racist walrus finds himself lost in the Detroit Projects after dark.

A racist walrus finds himself lost in the Detroit Projects after dark.