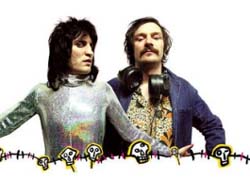 Come with us now on a journey through time and space...to the world of the Mighty Boosh.
Advertisement:

The Mighty Boosh is a rather unusual British comedy series about two friends, Howard Moon (Julian Barratt) and Vince Noir (Noel Fielding), who have bizarre adventures together. Howard is a humorless braggart with a love for jazz and a penchant for getting into trouble, and Vince (the "King of the Mods", the "Mayor of Camden", and the face of Cheekbone magazine) ends up saving Howard Once an Episode, which tends to involve him talking to animals and wearing silly outfits. They eventually have to fight a Monster of the Week (usually in song) while meeting a range of strange characters, many of whom are also played by Barratt and Fielding.

The two work at a zoo and end up living together with the Deadpan Snarker stoner shaman, Naboo (played by Michael Fielding, Noel's brother, whose hair is the show's namesake), and Bollo, Naboo's gorilla familiar (Dave Brown). Episodes have tended to focus on Howard and Vince leaving the zoo (first series), their flat (second series), or Naboo's shop (third series) but locations have varied from the Arctic tundra, Monkey Hell, and the planet Xooberon.

The humor of the show is based on a combination of non-sequiturs, pop culture references, psychedelic visuals, and musical interludes. The look of the show is intentionally low-budget but highly creative. The humor ranges from the silly to the surreal, but stays happy and sweet. Much like a children's show, only with balls jokes.

Part of the show's appeal is its homemade vibe. The visual elements (including the animations) are based on Fielding's art, while Barratt composes all of the music (and plays a mean guitar). Many of the extras are Barratt's and Fielding's friends and family.

The Mighty Boosh was a stage act, then a radio series, before it became a TV show. It returned to the stage between Series 2 and 3. Another live tour took place between 2008 and 2009. The whole crew reunited in 2013 for several music-centric stage shows in the UK and one at Festival Supreme on Santa Monica Pier.

If you've ever wondered what would happen if the characters of Bob Fossil and Dixon Bainbridge got their own show, see Snuff Box.

Vote for your favourite episode by heading over to the Best Episode Crowner!

The Angry Crab of Trapped Wind

Howard's dream of being cast in a film made by his hero, avant-garde director Jurgen Haabemaaster, doesn't play out the way he hoped...

The Angry Crab of Trapped Wind

Howard's dream of being cast in a film made by his hero, avant-garde director Jurgen Haabemaaster, doesn't play out the way he hoped...