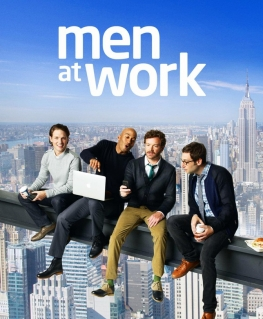 Men at Work is a sitcom on TBS about four friends- Milo (Danny Masterson), Tyler (Michael Cassidy), Gibbs (James Lesure), and Neal (Adam Busch)- who try to help each other navigate the treacherous waters of relationships while working at a magazine.

Not to be confused with the band or the film.

Men at Work provides examples of: