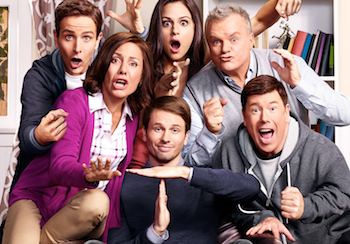 The McCarthys are a close-knit family of proud Boston natives with a passion for basketball. Youngest son Ronny, however, feels left out because he feels his family, while accepting, doesn't really understand his struggles as a gay man or his lack of interest in sports. Complicating matters is the fact that his mother refuses to cut the apron strings and is passive-aggressively trying to keep him and his siblings close by even as Ronny tries to move away from his family and forge his own identity.

Ronny is convinced to stay in Boston when his emotionally-distant father reaches out and asks him to be the new assistant coach to his father's high school basketball team even though he knows nothing about the sport.

Tropes included in The McCarthys: