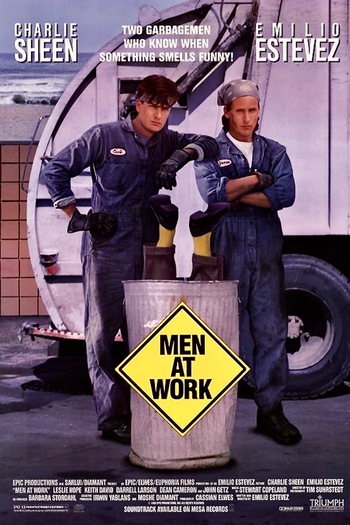 Men at Work is a 1990 American action comedy thriller film written by, directed by, and co-starring Emilio Estevez.

Carl Taylor (Charlie Sheen) and James St. James (Estevez) are a couple of slacker garbage collectors who dream of one day owning their own surfboard store. Until then, though, all they can do is their job (poorly), get hassled by some local bicycle cops who don't think very highly of them, and spy on a woman in the building across the street from theirs, Susan Wilkins (Leslie Hope). Since they tend to throw the garbage around and aggravate the locals with their noise, their supervisor has placed them on probation and will have his brother-in-law Louis Fedder (Keith David) shadow them for the next few weeks.

Meanwhile, Jack Berger (Darrell Larson), a city councilman who's running for mayor, has had enough of allowing Corrupt Corporate Executive Maxwell Potterdam III (John Getz) to illegally dump the waste from his factory into the bay, and has decided to rat him out, even secretly recording his confession to what he did while they are talking. Naturally, a man like Maxwell doesn't want the public finding out about his actions, so he decides to have some hitmen kill Jack to keep him from talking.

The day after Carl shoots Jack in the rear end with a pellet gun for throttling Susan in her apartment, Carl, James, and Louis find his body in a waste barrel, with Carl and James assuming Carl killed him (until Louis points out the strangle marks on his neck). From there, these two, along with a Pizza Delivery Man they had to abduct too keep him quiet about the body (Dean Cameron), end up embroidered in Jack's and Maxwell's business.

Men At Work contains examples of: